Since Nakamoto’s seminal paper [1], it has been clear that certain users, that do not have the communication and computational resources necessary to validate the updates to the replicated database, would inevitably be relegated to the edge of the blockchain network. A huge class of these users is represented by Internet of Things (IoT) devices, and represented by sensors, smart appliances, and other devices, often with frugal computation and communication capabilities. Nevertheless, the definition of “blockchain edge network” is still blurry and discussed in the following. 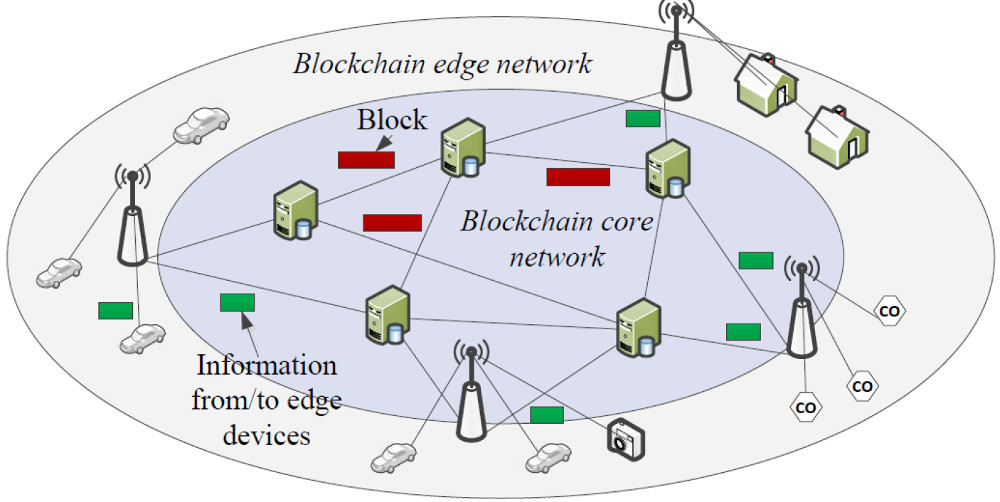 Smart contracts are seen as the main blockchain-powered mechanism that is likely to gain a wide acceptance in the IoT domain. The transactions associated with smart contracts require two-way communication traffic, which violates the common assumption that the IoT systems are dominated by an uplink traffic. Dealing with this blockchain-induced traffic requires a proper architecture for the edge of the blockchain network, where the IoT devices are associated and connected.

We believe that, to be considered at the edge of a blockchain network, a device should be capable of writing or/and reading (but better both reading and writing) information pertaining to the blockchain, without delegating the operation to third parties.

In this context, “writing” means being able to locally sign transactions, operation that is challenged by the low computational capability of many devices. “Reading” means to verify whether some information of interest has been included in the blockchain. In general, writing on the blockchain is associated with an uplink traffic, while reading with the downlink traffic. The wireless communication technology used by the IoT devices is often referred to as Machine-Type Communication (MTC) and it is mainly optimized for uplink transmissions.

An example of device capable to write, but not to read, is a “dumb” sensor. This is inevitable in some scenarios, e.g. if the device communicates through a technology optimized for uplink transmission, such as Sigfox [2]. Still, in the case when the device’s transaction is effectively included in the blockchain, we can trust that the data has been originated by that sensor.

The capability of reading blockchain information, and therefore making use of a downlink feedback channel, provides the device with two additional valuable features.

First, the signature of transactions can now be delegated to third party, because its correctness can be verified, by independent observation of the blockchain, through the downlink feedback channel. The metadata consists of cryptographic signature and additional fields, which can cause a substantial burden on the IoT device and the MTC link, considering that the typical data size transmitted through the MTC interface consists of few bytes. In that sense, the feedback channel also removes the overhead of sending transaction’s metadata in uplink, because they are added by the delegated third party.

The second valuable point is when there is an importance in the freshness of the information, sometimes referred to as age of information [3], which is transmitted to the blockchain. For example, consider a device that is required to periodically report to the network that it is alive. Here, the feedback channel is needed to estimate the state of the validation operations, such as mining of new blocks in Proof-of-Work blockchains. When the queues of the validators are overloaded, the transactions are not immediately included in the blockchain [4]. In this scenario, the validators will include in the blocks the transactions that offer to them a higher fee. By knowing the state of the validation operations, the device can decide the appropriate amount of fee to be included in the next transaction, in order to be validated by core network within a certain deadline.

These arguments motivate why a device, for which both writing and reading are delegated, cannot be considered to be a part of the blockchain network.

From the previous discussion, it follows that the downlink channel plays a crucial role in keeping the decentralized feature of blockchains. However, this stands in contrast with the typical assumption that the MTC traffic is mostly of uplink nature. Furthermore, the limited capabilities of IoT devices still require that the downlink resources are used sparingly [5]. For this reason, there is a need to promote lightweight-client protocols that provide feedback channels, with low communication requirements, at the expense of reduced security guarantees. We differentiate between two families:

(i) Protocols based on economic incentives [6]. The core network machines do not send to IoT devices the metadata that is used to authenticate the data. This is because these machines have backed their trustworthiness with a deposit of money to the IoT device. This reduces the communication cost and practically removes the computational cost.

(ii) Protocols that separate information of common interest (such as block headers) from the information that is of interest to specific devices. The frequent broadcasting of block headers, which happens whenever a block is generated, is a powerful feature of blockchains, as it provides updates about modifications happened in the core network, while keeping the communication cost low. For example, the block headers are used to verify Merkle proofs, but they may also contain small-size logs of events, written through Bloom filters, as in the Ethereum protocol [7]. Based on them, the IoT device can locally do a partial verification at low computational cost. The block headers typically have a small size, ranging from 80 to 500 bytes in popular protocols.

We argue that, to enlarge the class of devices admitted to the edge network, the architecture should be designed starting from the edge protocols, before optimizing the parameters of the core blockchain network. For instance, in order to increase the transactions throughput, an IoT-centric blockchain would increase the size of blocks, rather than decreasing the block period. In fact, for some IoT-oriented wireless technologies, e.g. LoRaWAN [8], it is impractical to exchange frequent messages, due to the limitations on the duty cycle. This impedes the frequent transmission of block headers to the edge network. Increasing the block size has an impact on the core network only, as the full block is only transmitted within this part of the network. However, this is not a reason for concern, as the core network has much higher communication capabilities as compared to the IoT devices.

For the edge network, the block header size also matters. By avoiding the inclusion of unnecessary metadata, the cost of transmitting it would be drastically reduced. The adoption of a fixed-size block header, such as the one adopted by Bitcoin, is also desirable, since it provides a predictable communication cost.

The design of efficient and secure protocols, that enable the interaction of IoT devices with the core of blockchain networks, is a promising and rapidly evolving research area. On one hand, the absence of well-established, blockchain-based applications is impeding the evaluation of their actual requirements. On the other hand, the ultimate risk is to design blockchain applications without considering the technology bottlenecks that will inevitably arise in the edge network. This would have the effect of pushing the IoT devices out of the edge of the blockchain network, leading, again, to centralization of operations. We therefore call for a holistic architectural approach in designing blockchain-powered applications for wireless IoT devices.

Petar Popovski (S'97−A'98−M'04−SM'10−F'16) is a Professor of Wireless Communications with Aalborg University in Denmark. He received his Dipl. Ing and Magister Ing. degrees in communication engineering from the University of Sts. Cyril and Methodius in Skopje, Republic of Macedonia, and the Ph.D. degree from Aalborg University in 2005. He has over 300 publications in journals, conference proceedings, and edited books. He holds over 30 patents and patent applications. Professor Popovski is a Fellow of the IEEE. He received an ERC Consolidator Grant (2015), the Danish Elite Researcher award (2016), IEEE Fred W. Ellersick prize (2016) and IEEE Stephen O. Rice prize (2018). He is currently a Steering Committee Member of IEEE SmartGridComm and previously served as a Steering Committee Member of the IEEE INTERNET OF THINGS JOURNAL. He is currently an Area Editor of the IEEE TRANSACTIONS ON WIRELESS COMMUNICATIONS. Professor Popovski is the General Chair for IEEE SmartGridComm 2018 and IEEE Communication Theory Workshop 2019. His research interests are in the area of wireless connectivity and communication theory.

Honggang Wang was the "Scholar of The Year" (2016). Before he joined UMass Dartmouth in 2009, he has worked for Bell Labs Lucent Technologies China from 2001 to 2004 as a Member of Technical Staff. He received his Ph.D. in Computer Engineering at University of Nebraska-Lincoln in 2009. He is a tenured associate professor at UMass Dartmouth. His research interests include Internet of Things, Wireless Health, Body Area Networks (BAN), Cyber and Multimedia Security, Mobile Multimedia and Cloud, Wireless Networks and Cyber-physical System, and BIG DATA in mHealth. He has published more than 150 papers in his research areas. He was an invited participant by National Academic Engineering (NAE) for 2017 German-American Frontiers of Engineering Symposium, as one of about 50 outstanding engineers (ages 30-45) from US companies, universities, and government labs. He has served as the general chair/co-chair and TPC chair/co-chairs for many IEEE conferences. He also serves as the steering committee co-chair of IEEE CHASE and TPC co-chair of IEEE CHASE 2016, which is a leading international conference in the field of connected health. He has also been serving as the Associate Editor in Chief (EiC) for IEEE Internet of Things journal (SCI impact factor: 7.596), associate editors for IEEE Transactions on Big Data and IEEE Transactions on Multimedia, an Editor of IEEE Transactions on Vehicular Technology, Associate Technical Editor of IEEE Communication Magazine. He received IEEE Multimedia Communications Technical Committee (MMTC) Outstanding Leadership Award (2015) and IEEE HEALTHCOM 2015 Outstanding Service Award. His research is supported by NSF DoT, UMass President office, and UMass Healey Grant (total over 2M dollars).