Blockchain is a digital database that is distributed across a large network. It is a sequence of interconnected blocks comprising of list of transaction records [14]. Blockchain is considered to be a public ledger in which all transactions are stored in the form of blocks. The chain expands as each new block is appended to it. Transactions cannot be altered once they are made part of blockchain. The size of database keeps on increasing as new blocks are appended to the older ones. A transaction can take place in a decentralized fashion, thus, saving cost and improving efficiency. Every time an update is made to the database on a network node, it is automatically updated across the entire network. Total number of transactions stored in a block depends on the size of each transaction and the block. Every transaction must be approved by the network nodes, each of whom verifies its validity. This block is validated using consensus algorithms where majority of network nodes approve the transaction [14].

Architecture:
A Block consists of a header and the body. The block header comprises of a block version, timestamp and address of the previous block etc. The block body consists of actual transaction details and the transaction counter [5]. Each block in the blockchain network points to the previous block, called ‘parent’ block, using a hash function. The very first block having no parent is referred to as ‘genesis’ block [14]. Children of the ancestor blocks are called ‘uncle’ blocks.

Blockchain transaction process is initiated as soon as a “transaction” is requested by a network node. The request and user status are authenticated by the network using cryptographic algorithms. The verified transaction is appended with other authenticated transactions stored in a block. Once a block reaches a certain number of approved transactions, a new block is generated. After validation, the block is appended to the older blocks making it a permanent part of blockchain [2][10][11]. All the network nodes are updated with the changes every few minutes.

Characteristics:
Some of the characteristics of blockchain networks are illustrated in Figure 1. It is impossible for hackers to hack these network nodes as cryptographic techniques have been deployed to secure it [1]. Each transaction is authenticated and validated using digital signature based on cryptographic algorithms [14]. The blockchain network is decentralized in nature which makes it more transparent and reliable for the storage and transfer of important data, currency, financial transaction or any valuable record [2][3]. Each transaction is validated using a timestamp which makes it possible to trace and verify previous records by accessing any network node. It helps in improving transparency of data stored on the network [14]. Each user interacts with the network with a generated address. A certain amount of user privacy is preserved as there is no central entity that stores user’s private information. It is possible to perform anonymous transactions on the blockchain network. It only requires the network address of the receiver to perform the transactions [11].

A transaction can be performed between any two peers directly without interference of any central entity. It results in reduced operation and development cost of servers. Any falsification in data can be detected easily as each broadcasted block will be validated by other network nodes. The record cannot be altered without the consensus of group members, which makes blockchain transactions more reliable and persistent. The network nodes verify transactions collectively. Any financial transaction made on the network is confirmed and secured using cryptographic algorithms. Once a transaction has been verified by the network, it is placed in a block in a way that newer blocks are placed under previous blocks of financial transactions.

Being a shared database, details of the financial transaction are visible to all nodes. So, the network is transparent and requires trust of the users. Financial transactions can be made without the need of third-party interference. There is no central point of failure, so the network keeps on running even if any of the nodes leaves the network, making all the data accessible to users all the times. Records in a blockchain are immutable and will be saved for unlimited time [1][2][3][11]. 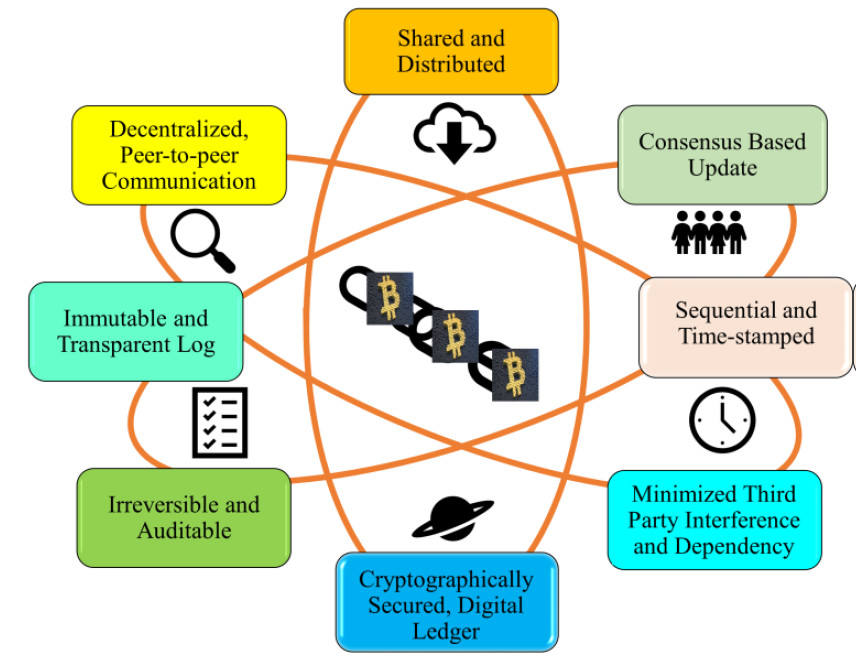 Types of Blockchain:
A blockchain network has three types: public, private and consortium [2][4].

Challenges:
There are a few challenges associated with the blockchain networks [2][9]. There is huge storage requirement as the validation process involves the whole blockchain. Only a few transactions can be performed per second due to fixed block size which in turn causes increased transaction delays and high transaction fee. If the block size is increased, it will cause additional delay in block propagation. Moreover, it is possible to generate fake blocks by the network nodes or generate transactions that are reverse confirmed. Rapid generation of blocks is possible by increased power consumption, resulting in legitimate blocks not being able to get their share of blockchain network resources. An important challenge of blockchain networks is the energy consumption. These transactions consume huge amount of energy. It is estimated that each Bitcoin transaction consumes 80,000 times more energy as compared to a credit card transaction.

In general, blockchain technology is applicable for the following conditions [12],

Future directions:
Leading platforms that are driving innovation in this area are Hyperledger, R3 and Ethereum [3]. These open source communities are at the foundation of the Blockchain platform technology “pyramid”. Multiple horizontal and vertical platforms are being developed by IT vendors like IBM, Microsoft, Oracle, SAP etc. These companies are developing horizontal Blockchain platform based on the three open source technologies, mentioned above, at the base of the pyramid. Subsequently, this middleware serves as the middle layer of the pyramid. Customized solutions for different Blockchain verticals are being developed by different consulting companies like KPMG, Accenture and Cognizant etc. These system integrators and consulting companies constitute the top of the pyramid [3].

The field of Blockchain technology is at the nascent stage. It is anticipated that the enterprises will extend their existing IT systems with Blockchain based systems to test its functionality and upgrade internal business processes and models subsequently. However, it will take time for the industry to appreciate the real benefits of this technology and the value it could bring to an organization, before the core IT functions are completely transferred to this technology.

[12] Thomas Mueller. Three simple steps to find the ultimate answer to the question: “ When do I need Blockchain for my business?”. [Online]
Available: https://medium.com/evan-network/three-simple-steps-to-find-the-ultimate-answer-to-the-question-when-do-i-need-blockchain-for-my-cd794ae10c40

Muhammad Fateh Khan SIal is currently serving as Assistant Professor at the Department of Electrical Engineering, University of Lahore, Lahore, Pakistan. He has a Bachelor’s degree in Electrical Engineering (2008) from the National University of Sciences and Technology, Rawalpindi, Pakistan. He completed a Master’s degree in Communication Engineering in 2010 from the Technical University of Munich, Germany. He is a member of the Pakistan Engineering Council and a Professional member of IEEE. His research interests include 5th Generation networks, Signal Processing and Blockchain Technologies.

Zheng Yan is currently a full professor at the Xidian University, China and a visiting professor and Finnish academy research fellow at the Aalto University, Finland. She received the Doctor of Science in Technology from the Helsinki University of Technology, Finland. She authored and co-authored about 200 peer-reviewed articles, 8 conference proceedings and solely authored two books. She is an inventor of 60+ granted patents and PCT patents, all of them were adopted or purchased by industry. Some of her granted patents are applied in international standards. She has given 20 keynotes and invited talks in international conferences and universities. Her research interests are in trust, security and privacy; data mining; mobile applications and services; social networking and cloud computing. Prof. Yan serves as an organizational and technical committee member for more than 80 international conferences and workshops. She is an associate editor of IEEE IoT Journal, Information Fusion, Information Sciences, IEEE Access, JNCA, Soft Computing, IEEE Blockchain Technical Briefs, Security and Communication Networks, etc. and a special issue leading guest editor of ACM TOMM, Future Generation Computer Systems, Computers & Security, IJCS, MONET, IEEE Systems Journal, etc. She is a founder steering committee co-chair of IEEE Blockchain conference. She is organizing and has organized 10+ conferences, such as IEEE Blockchain 2018, NSS/ICA3PP/IEEE CIT2017, IEEE TrustCom/BigDataSE/ISPA-2015, IEEE CIT2014, etc. Her recent awards include a number of Outstanding Leadership Awards for the IEEE conference organization; the 2017 IEEE ComSoc TCBD Best Journal Paper Award; Outstanding Associate Editor of 2017 for IEEE Access; EU Eureka Excellence Award (2017); Best Individual of Shaanxi Province from Abroad (2014), “100 Expert Plan” winner of Shaanxi Province, China (2011); Sisu Award of Nokia Research Center (2010); EU ITEA Bronze Achievement Award (2008). She is a senior member of IEEE.