Time Banking is a generalized exchange economy not based on money, but values everyone’s contribution on the same scale (time expended) [5]. Time banking has spread rapidly in recent years. For example, the nonprofit organization, TimeBanks USA facilitates 276 time banks in North America through 27,000 members, as well as in other countries [1]. In time banking system, all members’ time is treated as equal, which allows value created by service exchanges to remain within the local community. Apart from the obvious benefit of allowing people without money or a job to participate in value creation, a time bank creates opportunities for new relationships to form and strengthens bonds among community members [2]. Time banking itself is also a network, which functions as a platform letting people provide and receive services from each other by donating their time. Generally, it does not involve real money. One simple example is that one person can hire another one for massaging for one hour. Then, the masseur earns one hour credits and next time, the masseur can spend the credits to hire other people to work for him/her for one hour:

There are five core values of time banking as listed by Edgar Cahn, the founder of modern time banking [3], [4].

1)  The asset, everyone has something to provide, from washing dishes to taking care of elder people, or even providing accompanying.
2)  Redefining work, some work cannot be found on the market like revitalizing neighborhoods, or is hard to hire someone who is trust worthy.
3)  Reciprocity, this emphasis providing and receiving among the neighbors and thus helps building strong connections between neighborhoods.
4)  Social networks, it will be strengthened by time banking because time banking provides a way that allows people to share their skills among each other.
5)  Respect, every transaction in the time banking is based on the agreement and trust. And because block chain is enabled in time banking thus the trust can be guaranteed.

Time banking is a noble idea and its potential has been recognized by more and more people [11]. However, it has not brought impacts as significant as its inventor expected because of several weaknesses. Some researchers considered that psychologically the metaphor of “bank” failed to serve its purpose of promoting the community centered, peer-to-peer service exchange [2]. In terms of technology, however, one of the major weaknesses is that the security and trust issues are not well addressed. In a community consisting of dozens of residents it is very likely that people does not know each other very well. A person may know the others living in the next building but not the one who lives a block away. Therefore, a trustful relationship could not be built in a community and people normally would not take risk of asking someone who lives a block away to help.

A blockchain is a growing list of records, called blocks, which are linked using cryptography. Each block contains a cryptographic hash of the previous block, a timestamp, and transaction data [7]. The blockchain technology provides a more secure way of making transaction due to its decentralization characteristics and consensus mechanism. A smart contract is a computer protocol intended to digitally facilitate, verify, or enforce the negotiation or performance of a contract [8]. Every transaction becomes more transparency than ever before. And the consensus mechanism encourages people to get involved in this prosperous decentralized network. Meanwhile, smart contract guarantees that the agreement is immutable and unbroken. People can rely on these to avoid being cheated. These attractive properties make the blockchain and smart contract ideal technologies to address the security and trust issues in the generalized exchange economy.

Figure 1 illustrates the high level view of a blockchain enhanced design of a time banking application. Different from traditional web applications that relies heavily on a central server, the blockchain enhanced time banking application uses the Ethereum platform to achieve the goal of a decentralization. There will not be a central server. Every user’s computer becomes a server and records the transactions. For example, as shown in Fig. 1, if Kevin mows Angela’s lawn, this action will be recorded into a transaction that is included in a block attached to the existing chain. Each user’s computer will maintain a copy of the chain, which is the history of all activities. 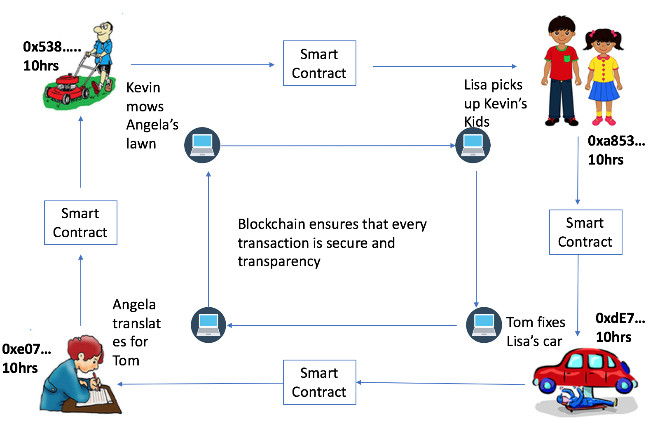 To start the blockchain enhanced time banking system, first of all, a group of users will be created with unique public keys and certain hours for development purpose. The public key is used to identify each of them in the system, and the hours is users’ initial deposit, which can be spent to receive services from others. Then a smart contract is constructed among these users, which defines the transactions between the time and services. The smart contract plays an important role in the application. In the contract, some rules are defined to pass the transaction, like the basic line of a user’s credit score. If a user doesn’t have enough credit score, then this user may need to do some volunteer work to increase the credits.

Users can offer and request services through the time banking system. These services will be uploaded to the contract and be recorded in the blockchain. All the services provided by each user will be visible to the front end. When a user wants to accept a service offered by others, this user can apply for that service. After the amplification, the information of the applier will be filtered by the smart contract. The information may include credits score, reputation, past activity records and so on. If the information matches the criteria specified in the contract, the applier will be approved to receive the service. Meanwhile, the service providers are also required to go through a similar filtering process. These processes ensure the safety and security of both the service providers and the users. Considering the tragedies happened recently at Uber [6] and DiDi [9], it is mandatory to have a stricter security screening mechanism.

While we have witnessed the revolutionary impact that blockchain technology has brought to many fields including e-currency and Internet of Things (IoT), there is no doubt that it will play a critical role in reforming the relationship among residents in our communities. The peer residents can enjoy services without spending money and the community relationship is strengthened. Especially for the senior citizens and those who has limited financial capabilities, who needs more cares. Actually, the idea of blockchain enhanced time banking is not limited to time banking application itself. It may serve as the first block of a novel style social credit system [10], which has the potential to construct more trustworthy and safer communities, promote the value and dignity in efforts focused on enhancing our communities and regulate its members’ behaviors.

Xuheng Lin is a Ph.D. student in Binghamton University – SUNY. He received the Bachelor degree in Electrical Engineering from the University of Dalian Jiaotong in 2009 in China. He then received master degree in Stevens Institute of Technology (SIT) in 2015. His research interest lies in the blockchain security and time banking. Before join Binghamton University, he has worked in Ripen Ecommerce, Johnson & Johnson, Cilutions Digital Media Bridge, MC3 Productions as a web developer and software engineer.

Ronghua Xu is a Ph.D. student of Electrical and Computer Engineering at the Binghamton University - State University of New York (SUNY). He earned his B.S. on Mechanical Engineering from Nanjing University of Science & Technology, China in 2007, and received his M.S. degree on Mechanical and Electrical Engineering from Nanjing University of Aeronautics & Astronautics in 2010. Prior to joining Binghamton, he has been with Siemens for six years on software development and system integration. His current research interests are Blockchain and Smart contract based security solutions to Internet of Things (IoT), and Microservice enabled Smart Public Safety System.

Dr. David K. Hwang is with the Graduate Institute of  Building and Planning, National Taiwan University, Taipei, Taiwan. He earned a Bachelor’s Degree from the Information and Computer Science Department at National Taiwan University in 1981 and the Ph.D. degree in 1989 from University of Illinois Urbana-Champaign. Dr. Hwang worked at Texas Instruments, Cyrix, National Semiconductor and Via Technology. He then was ordained as a minister at Forerunner Christian Church in 2008. In 2018 Dr. Hwang went back to Taiwan to promote Blockchain enchanted Time Bank System, and worked with Tim Jenkin’s CES (www.community-exchange.org) and started the www.twces.org.tw. He also received the grant from the Ministry of Science and Technology, Taiwan, to start the research of the social impact of time-banking in the city and rural areas in Taiwan. This is because Taiwan, like Japan, is facing and needs an alternative way to easy the aging society issue.

Dr. Yu Chen is an Associate Professor of Electrical and Computer Engineering at the Binghamton University - SUNY. He received the Ph.D. in Electrical Engineering from the University of Southern California (USC) in 2006. His research interest lies in Trust, Security and Privacy in Computer Networks, focusing on Edge-Fog-Cloud Computing, Internet of Things (IoT), and their applications in smart and connected environments. His publications include over 150 papers in scholarly journals, conference proceedings, and books. He has served as reviewer for NSF panels and for journals, and on the TPC of prestigious conferences. He is a Senior Member of IEEE and SPIE, and a member of ACM.