From Block-based to Blockless: A Paradigm Shift Towards Blockchain Interoperability

Today, a brand-new age of ‘Web 3.0 era’ —sharing and unleashing the Internet of value—has begun. Blockchain technology holds the promise of being the trust machine in ‘Web 3.0 era’. It is foreseeable that there will be a significant number of blockchain systems launched to disrupt all sectors of our life, such as Bitcoin [1], Ethereum [2], IOTA [3], Swarm [4], etc. In this light, ‘blockchain interoperability’ [5] is perceived as the prominent characteristic of facilitating the interactions amongst different blockchains (i.e., heterogenous or homogeneous) to empower the future ecosystem. A broad range of scenarios for exploring such interoperability include transfer of cross-chain digital assets, recommendation of digital currency, synergy of distributed storage, real-time cross-chain liquidation, identity authentication of users with multiple roles, cross-chain data share, cross-chain certification and so forth.

Mainstream blockchain systems have long faced the challenge of designing a data structure as a fundamental primitive of interoperability. While many systems employ `block-based’ structure to enable cross-chain interaction, the deficiencies of the complex nesting of data, repeated network transmission and redundant data storage [6] [7] render it unable to achieve high efficiency. To be specific, as the transactions are packaged in the format of blocks, the source chain has to parse a block into multiple transactions before obtaining the required transaction. The process of parsing the blocks introduces extra overhead. Besides, a piece of valid data will be broadcast twice. At the first time, the data is broadcast as a transaction. At the second time, the same data is packaged in a block to be broadcast again, which incurs repeated network transmission. Further still, as blocks in different chains cannot be shared directly in nature, data are stored redundantly. As a consequence, each chain is bound to be an isolated island, which will decrease the vitality of blockchain community, and hinder the further development of blockchain ecosystem.

It is urgent to design a new storage paradigm that aims to provide a flexible, secure and scalable blockchain infrastructure for interoperability. We hereby introduce the primary principles as follows:

We propose Vine (Veritable Interoperability for Next-generation Blockchain Ecosystem), a novel block-less solution to support efficient and secure interactions amongst interdependent blockchains. The intuition is strongly inspired by DAG (Directed Acyclic Graph) that removes the block structure and organizes the data in the format of transactions directly [8]. Compared to block-less blockchain systems, DAG-enabled blockless system can provide higher efficiency. A detailed comparison between block-based and DAG-enabled blockless blockchain systems is concluded in Table 1. Different from the existing DAG-enabled projects [3][9][10], which only focus on a single chain, Vine is the first solution to apply DAG to the scenario of interoperability. Apart from DAG, Vine further unifies the transaction format of different chains and enables different chains to share the underlying network space, thus reducing the network and storage overhead largely.

The unified data structure based on DAG can effectively reduce the overheads and raise the efficiency in terms of blockchain interoperability. To be specific, process of block parsing is removed due to blockless structure, so as to avoid the overhead in parsing the blocks. In addition, deploying different chains in the same network space directly can avoid the repeated broadcast of the same transactions. What’s more, as data is stored in the format of transactions, the same transaction in different chains can be shared easily.

Blockchain, the groundbreaking technology behind Bitcoin and Ethereum is gaining increasing attention and experiencing a boost of global adoption. By building upon the novel ‘blockless’ storage paradigm, the massive interdepend applications will be sprout up and promoted in the next-generation blockchain ecosystem. 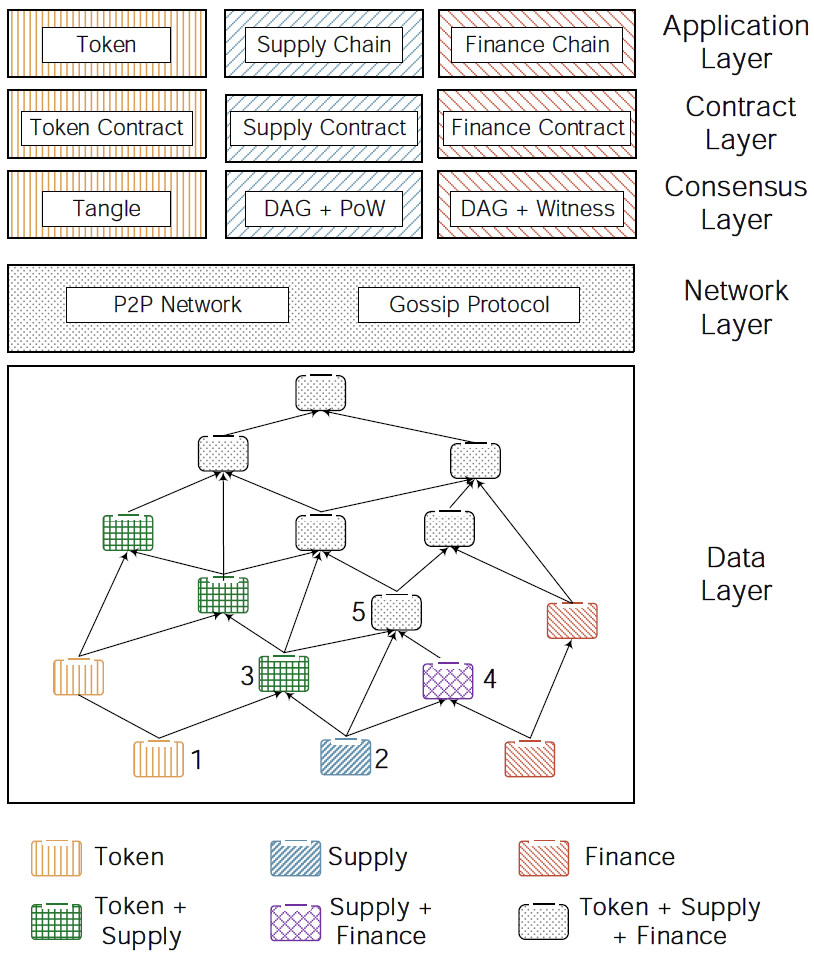 [9] Anton, "Byteball: A decentralized system for storage and transfer of value," 2016.

Hai Jin is a Cheung Kung Scholars Chair Professor of computer science and engineering at Huazhong University of Science and Technology (HUST) in China. Jin received his Ph.D. in computer engineering from HUST in 1994. In 1996, he was awarded a German Academic Exchange Service fellowship to visit the Technical University of Chemnitz in Germany. Jin worked at The University of Hong Kong between 1998 and 2000, and as a visiting scholar at the University of Southern California between 1999 and 2000. He was awarded the Excellent Youth Award from the National Science Foundation of China in 2001. Jin is the chief scientist of ChinaGrid, the largest grid computing project in China, and the chief scientist of National 973 Basic Research Program Project of Virtualization Technology of Computing System, and Cloud Security. Jin is a fellow of the IEEE and a member of the ACM. He has co-authored 15 books and published over 700 research papers. His research interests include computer architecture, virtualization technology, cluster computing and cloud computing, peer-to-peer computing, network storage, and network security.

Dr. Ammar Rayes (IEEE Senior Member) is a Distinguished Engineer at Cisco’s Advanced Services Technology Office focusing on Network Analytics, IoT and Machine Learning. He has authored three books, over 100 publications in refereed journals and conferences on advances in software & networking related technologies and over 25 patents. He is the Founding President of www.issip.org , Editor-in-Chief of “Advances of IoT” Journal and served as a Guest Editor of several journals and IEEE Communication Magazines.

He received his BS and MS Degrees in EE from the University of Illinois at Urbana and his Ph.D. degree in EE from Washington University in St. Louis, Missouri.