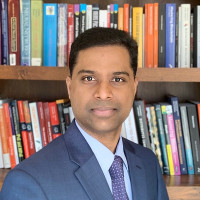 Dr. Ramesh Ramadoss is an entrepreneur, researcher, author, and international speaker based in Silicon Valley. He is a co-chair of the IEEE Blockchain Initiative. Currently, he is the Technical Director at InterWork Alliance.

Q: Describe the evolution of blockchain. Where did it start and what is the future of this technology?

In October of 2008 Satoshi Nakamoto published a whitepaper “Bitcoin: A Peer-to-Peer Electronic Cash System” and soon after in January of 2009 the first bitcoin software was launched. At this point blockchain was primarily cryptocurrencies. In late 2013, Vitalik Buterin envisioned a platform for “programmable money” with smart contracts. You could program some conditions for the transfer of digital asset. This evolved blockchain from strictly cryptocurrency to programmable chains. In 2014, the Gartner Hype Cycle placed cryptocurrencies at the peak of inflated expectations and in 2016 Gartner started to use the term “blockchain” instead of cryptocurrencies signifying to the tech world that blockchain is much more than bitcoin. As blockchain continues to move through the Gartner Hype Cycle, it is being explored in a variety of industries and applications including: finance, supply chain, energy, IoT, healthcare, pharma, IP, digital identity, real estate, government, media artis, insurance and justice.

Q: What are the foundational classifications and definitions you need to understand as blockchain evolved?

Blockchain technology is inspired by the concept of a shared ledger, so that is the first term you need to understand. A ledger is a permanent summary of all transactions as related to an account. There are two types of ledgers: public and private. Validators are people who can approve transactions. There are two types of validators: open group and closed group. After knowing these basic terms, you can understand three types of blockchains.

Q: As blockchain continues to evolve, where are the opportunities for growth and development?

In the open source community, decentralization projects are utilizing blockchain as a core component. Several projects are underway to build these decentralized services and the internet on public blockchains. Startups are also issuing tokens on public blockchains and raising capital initially through Initial Coin Offering (ICO), then Initial Exchange Offering (IEO), and now legally compliant Security Token Offering (STO). As token offering grew in popularity, worldwide regulations began to prevent fraud and scams. Another area of blockchain growth is with enterprises who are building private blockchains, tools for public blockchains, standards, and specifications. Traditional cloud-service companies have started offering blockchain-as-a-service (BaaS) solutions as well. Lastly, governments are turning to this technology to create their own private blockchain infrastructure. Moving towards digital currency could create a new framework for central banks that could have a profound impact on the global economy.

Q: Provide an overview of the current blockchain standardization landscape.

From international standards development organizations like the IEEE to the developer community, there are many parties working on standards. There are three types of standards being developed: blockchain specific, industry specific, and generic standards. At the generic level, international standards organizations, regional and government organizations are working on general topics such as terminology, taxonomy, smart contracts, governance, interoperability and more. At the industry specific level, enterprises are working on standards through alliances, associations, and consortiums to develop industry-specific blockchain applications, such as banking and supply chain. At the blockchain specific level, the open source developer community is working on technical specifications at the code level, such as EIP process. All parties are working on common goals toward blockchain standardization to address interoperability, scalability, adoption and governance. One of the biggest challenges is bringing stakeholders from different levels to work together.

Q: What are some of the emerging applications for blockchain technology?

It is exciting to think about the future of blockchain with a number of applications emerging. One of the biggest use cases for blockchain right now is in the supply chain. For example, now if there is a compromised food product, everything is removed from stores. With blockchain technology, we would be able to trace where the outbreak came from and then remove only the infected product. The pharmaceutical supply chain can benefit from the blockchain as well and combat against counterfeit drugs. Another emerging area is transactive energy. The blockchain can allow us to track energy at a more granular level, which helps us create a more flexible and efficient energy system for a sustainable future.

To learn more on these topics, Ramesh Ramadoss presented in the IEEE@Home Series: IEEE Blockchain Initiative & Overview of the Blockchain Ecosystem. View the recorded presentation at IEEE.tv.