The idea of a public blockchain was first conceived to prevent double-spending while processing monetary transactions in a peer-to-peer network [1]. In its original application, it allows a set of quasi-anonymous and mutually-distrusting parties to reach consensus on the ordering of monetary transactions. It has since been extended to other applications including execution of state machines (i.e., software programs) called “smart contracts” [2] in a decentralized fashion. Smart contracts have a major inherent limitation, as they can only operate on data that is on the blockchain. As a result, trusted entities called oracles attest to external data so as to bring it onto the blockchain. Existing oracles typically do not provide robust guarantees on the accuracy of this data. Trusted oracles are therefore at risk of becoming centralized points-of-failure for decentralized applications that depend on them. This isn't a major issue when the external data can be proven correct either cryptographically (such as data from another Proof-of-Work blockchain [3]), or computationally (such as the outcomes of computations that are infeasible to perform on  as Ethereum [4]).  However, most real-world facts present a challenge for existing oracles.

TLSnotary [5] and TownCrier [6] provide attestations regarding the content of websites accessed using the Hypertext Transfer Protocol Secure (HTTPS) protocol.  Such attestations can be checked cryptographically due to the use of Transport Layer Security (TLS), moving point-of-trust to the website itself. As such, these systems are only suitable in cases where one or more predefined entities are taken to be the arbiters of truth. Augur [7] is a prediction market with a built-in voting-based oracle to determine the outcome of events in order to pay out market participants. While offering greater decentralization by allowing anyone to participate in the oracle mechanism, Augur requires users to pre-register to report the outcomes of events at specific times. This is detrimental to the system’s usability from the perspective of the very users who make the system work.

To address the above-mentioned issues, we have developed Astraea [8] – a general-purpose decentralized oracle to determine the truth or falsity of Boolean propositions. Users of Astraea can participate in one or more of three roles: submitters, voters, and certifiers.  Submitters are clients who need to learn the outcome of Boolean propositions. As such, they provide propositions to the system and pay fees for doing so. Voters play a low-risk/low-reward game in which they are given the opportunity to vote on the truth or falsity of randomly-chosen propositions. Certifiers play a high-risk/high-reward game in which they certify propositions of their choosing as being either true or false. In general, participants may be rewarded when their vote or certification agrees with the majority outcome and may be penalized otherwise.

In Astraea, voters place a small monetary stake to earn the right to vote on a randomly-chosen proposition.  Subsequently, using a commit-reveal scheme, the voter submits a sealed vote of either true or false. A voter is rewarded for her vote on a particular proposition if it agrees with the majority of votes and certifications (explained below) for that proposition. Due to the random selection of propositions for voters, voting is resistant to manipulation by actors seeking to force an incorrect outcome for a particular proposition.

On its own the voting mechanism would be subject to a version of the verifier's dilemma [9] in which, rather than considering the actual propositions, voters simply always vote true or always vote false. To address this issue, Astraea also has a second set of participants called certifiers with different incentives designed to combat the verifier's dilemma. Unlike voters, certifiers place large monetary stakes in order to certify propositions of their choosing as either true or false. A certifier is rewarded for her certification on a proposition if it agrees with the majority of certifiers and the majority of voters and penalized otherwise. A high-level overview of the system’s architecture is shown in Figure 1. 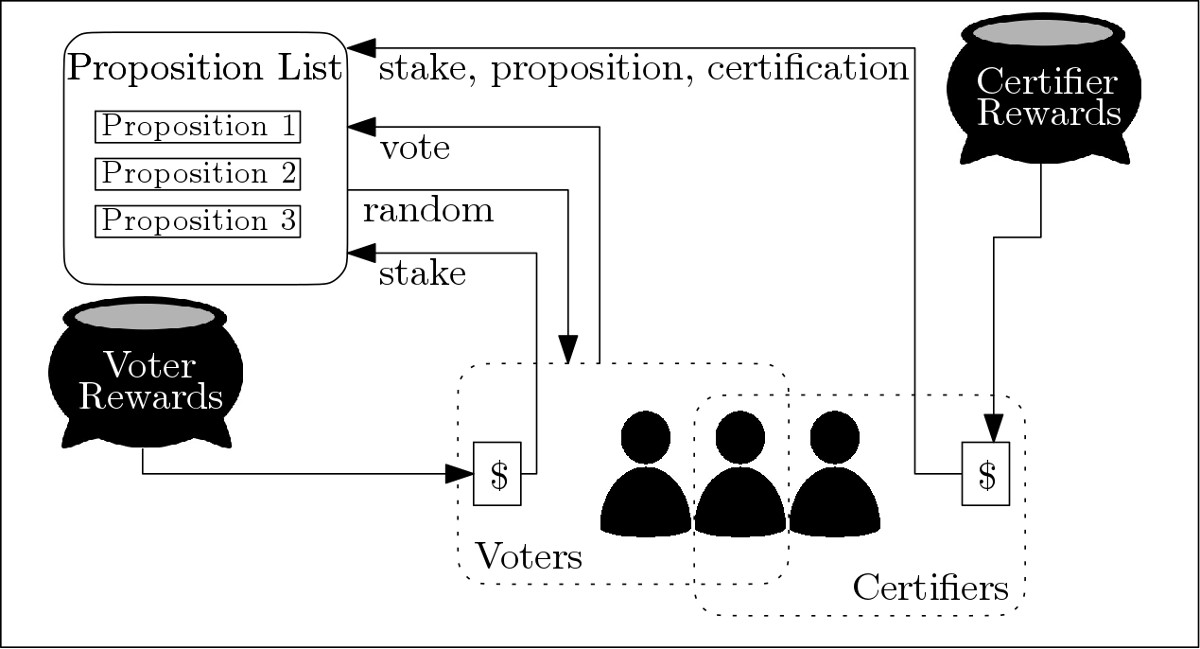 After a proposition has accumulated a certain number of votes, it is decided as either true or false based on the voting results, and rewards and penalties are administered to participating voters and certifiers. A proposition does not need to carry certifications in order to be decided. At this point, a voter is rewarded if her vote agrees with the majority of voters and certifiers, and penalized if it disagrees with both majorities. In other cases, including the case in which a proposition has no certifications, she receives no rewards or penalties.  By tying the voting rewards to certifier behavior, Astraea is able to avoid the degenerate equilibrium in which all voters always vote with a constant true or false without regard to the actual content of propositions. Since true and false certifications should occur equally often, voters cannot maximize their rewards by always voting true. As such, the equilibrium in which all participants behave honestly is expected to maximize rewards.

Astraea is an oracle for blockchain applications built around a voting-based game. Two sets of participants called voters and certifiers work together to determine the truth or falsity of propositions. The mechanism driving voter incentives is resistant to adversarial manipulation. Conversely, the mechanism behind certifier incentives is intended to combat the verifier's dilemma. By combining these two mechanisms, Astraea can achieve a high degree of resistance to adversarial manipulation and degenerate equilibrium behavior. As future work, we intend to explore alternative approaches to solve the verifier’s dilemma and provide a more thorough formal analysis of the system.